Hydropath technology powers the HydroFLOW devices which are highly efficient, non-intrusive electronic descalers that are installed on the water pipe entering your home or business. It treats fluids by inducing a robust yet harmless signal of 150kHz throughout plumbing systems made of any material, including PEX and PVC.

Unlike other products that treat liquids at a single point in a system and whose impact starts to diminish immediately after that point, HydroFLOW provides continuous water conditioning - ensuring a consistent and ongoing effect. Also, due to its unique, non-intrusive design, HydroFLOW doesn’t add any chemicals to your water supply while inhibiting pipe corrosion and eradicating bacteria and algae. Furthermore, while it protects your plumbing and appliances, it is also easy to install, requires no maintenance or wasted real estate. A residential grade HydroFLOW device costs about $1 in electricity per year. An industrial grade HydroFLOW device costs between $10 to $20 in electricity per year.

How scale is prevented with Hydropath technology 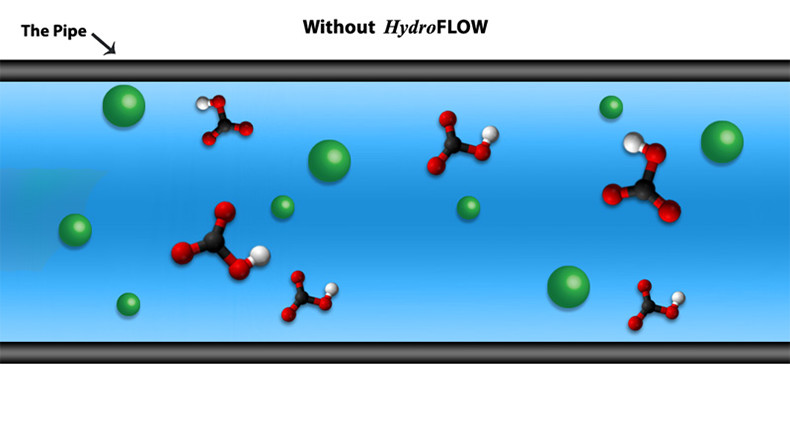 Minerals such as calcium carbonate, the mineral primarily responsible for limescale formation, are dissolved in the solution as TDS (Total Dissolved Solids). 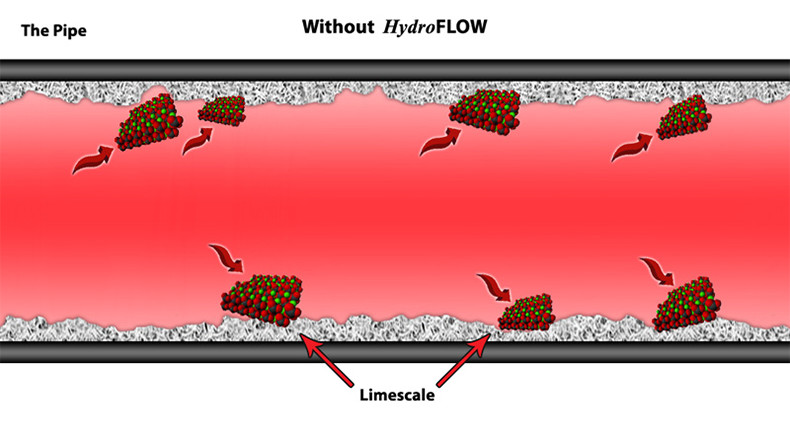 When temperature or pressure change occurs, minerals precipitate out of solution and accumulate as hard scale in pipes, in holding tanks and on heating elements. 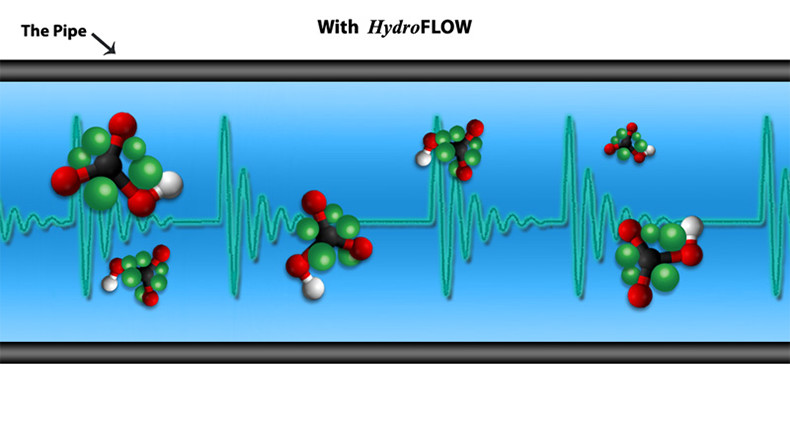 When the Hydropath signal is present, the dissolved minerals combine to form loosely held clusters. 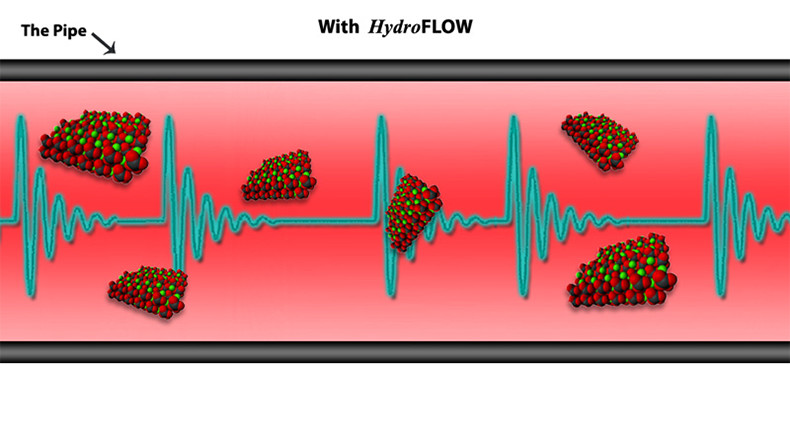 When the clusters precipitate out of solution due to a temperature or pressure change, they form stable calcite crystals that do not accumulate as hard scale on the inner surface of pipes, holding tanks or heating elements. This results in the effective prevention of limescale buildup and eliminates the need for a water softener.

How existing scale is removed with Hydropath technology 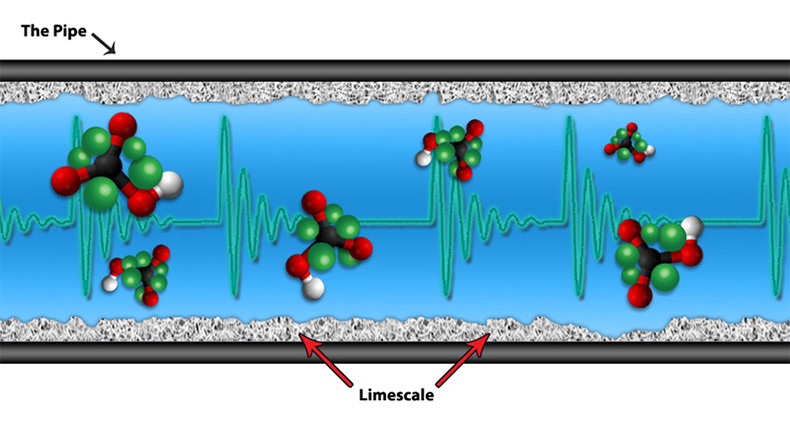 As mentioned above, Hydropath technology treats fluids by inducing a robust yet harmless signal of 150kHz throughout plumbing systems made of any material, including PEX and PVC. When the Hydropath signal is present, dissolved minerals combine to form loosely held clusters. 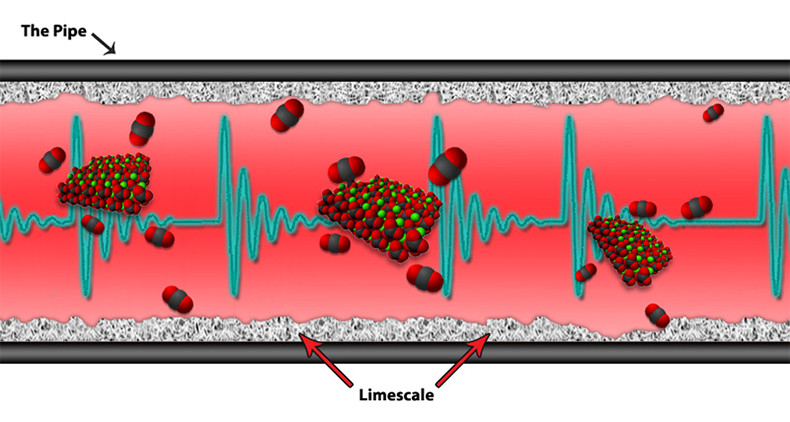 When the clusters precipitate out of solution, they form stable calcite crystals that do not accumulate as hard scale. 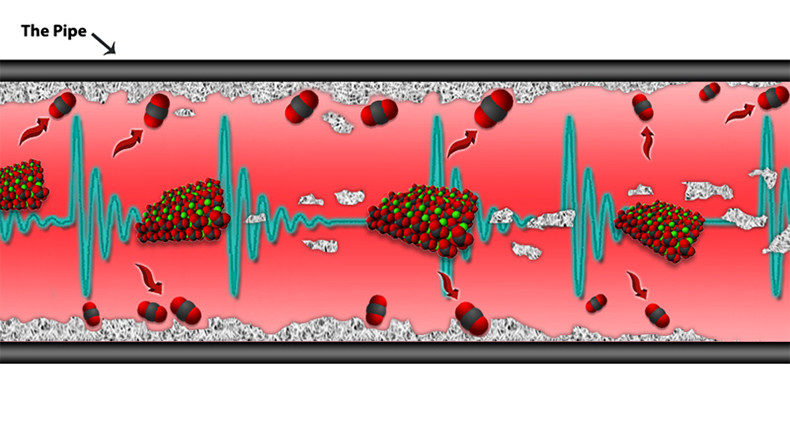 However, with Hydropath technology, when the clusters precipitate out of solution, they form stable calcite crystals that do not accumulate as hard scale. Since hard scale no longer accumulates, liquid flowing in the pipe contributes to the removal of existing scale deposits.

The cost of scale

It’s important to understand that scale buildup in pipe systems, heating and cooling elements, and appliances come at a significant cost. First of all, it compromises energy-efficiency. In fact, in water heating and cooling systems, a quarter of an inch of scale buildup results in a 38 percent loss of efficiency - and that means your energy bills increase substantially.

Also, limescale buildup in pipe systems can damage the pipes and cause leaks. The resulting costs of repairing or replacing the pipe system can be substantial. Furthermore, depending on where the leak or leaks were located, there can be severe water damage to the building, including mold growth.

Limescale buildup can also shorten the life of appliances such as dishwashers, washing machines, coffeemakers and more. Scale buildup on heating elements, as well as on other parts of the appliances, can damage components, leading to costly repairs and shorter functional life.

Even though most of us aren’t usually aware of a problem like scale buildup, it’s an issue that comes at a considerable cost. HydroFLOW is specifically designed to protect you against these costs by not only preventing scale buildup but also removing any existing scale.

HydroFLOW can be used to protect a range of residential applications, such as water heaters and appliances, as well as pools and spas. When it comes to commercial and industrial applications, it can be used for cooling towers, chillers, filtration systems, water features, steam boilers, belt filter presses, heat exchangers and more.

Want more information about HydroFLOW and non-intrusive electronic descaling? Contact us today for answers to all your water treatment questions.