Water is such an integral part of our everyday life, but in almost all cases, water does not start out clean. This is why water typically goes through many stages of treatment before it ever gets to you. Even once water has already been treated by your city and makes its way to your storage tank and pipes, it may not be in the condition you want it.

This is where water conditioning comes in. Water conditioning aims to address three major issues that are present in most water sources: limescale, bacteria, and algae. These problems can cause a whole host of issues in water systems, including on the insides of pipes, on heat exchangers, on fixtures, and more.

If your primary goal is to keep water from damaging or causing problems in your plumbing system or increase the efficiency of your appliances, trying to figure out the best option for treating your water can be overwhelming. There is a myriad of solutions out there, and it can be difficult to understand the differences between them and which solution is best for your home or business.

In this post, we'll focus on two types of water treatment systems: water conditioners and water softeners. These terms are often confused, so we'll clarify the difference and explain how each works.

Before we discuss the differences between these two terms, let's talk about the similarities. The reason for this is that water conditioners and water softeners are both used to address the common problem of water hardness. Hard water is water that is rich in minerals like calcium, magnesium, and silica.

These minerals can cause serious problems for heat-exchange surfaces, pipes and water fixtures throughout your home and business. Over time, pipes could become completely clogged by scale buildup. When limescale builds up on a heating element, it insulates it and prevents it from doing its job efficiently. Hard water can cause ongoing, everyday problems, too. It's no wonder that homeowners and businesses alike want to find a way to combat this issue.

We've already seen what these two terms have in common, so what's the difference between them? When it comes to the issue of hard water, a traditional water softener actually removes calcium, magnesium and silica ions, leaving it with small quantities of what is known as “temporary hardness”. The softener replaces these ions with salt through a process called ion exchange.

A water conditioner, on the other hand, is a more innovative solution that manipulates the way the hardness minerals in a liquid solution behave. The result is that they are still present, but they don't build up on surfaces and cause problems. Since calcium, magnesium and silica are healthy minerals to humans and other animals, keeping them in the water is a great advantage, as long as they aren't damaging your plumbing system.

While both water softeners and water conditioners are designed to address the problem of water hardness in some way, a water conditioner typically tackles other water issues, too — such as biological contaminants, including bacteria and algae, which can collect on surfaces. When these substances build-up, it is referred to as biofilm. A water softener alone is not designed to address the issue of biofilm — only scale.

Note that "water conditioner" is often used as a fairly broad term that may refer to any type of water purification or treatment system. We're focusing on the type of water conditioner that we've described here — one that can provide an all-in-one solution for both hardness and biological contaminants. There are different methods of conditioning water, but the result should be a liquid solution that does not allow buildup of any kind to damage your plumbing system.

How Does a Water Softener Work?

A water softener typically removes excess minerals from water through a process called ion exchange. To understand this process, you need to first understand that minerals are ionic. In other words, they are electrically charged. It's also important to understand that ions of opposite charges are attracted to each other.

Minerals such as calcium and magnesium, both have a positive charge. Sodium, the mineral that water softeners use to replace hardness ions, also has a positive charge, so none of these ions are attracted to each other. However, sodium's charge is weaker than that of calcium and magnesium. If ions aren't attracted to each other, how can an exchange take place? There is one other crucial element needed to make the process work: a resin bed consisting of lots of tiny, negatively-charged beads.

To keep this process up, you have to periodically add bags of salt to the water softener. This recharges the beads, so the ion exchange process can continue to work.

Some of the downsides of this process are that it wastes water since the excess minerals need to be flushed out and requires the addition of salt every so often to keep it going. This represents an ongoing maintenance task as well as a financial cost. It also makes this type of water treatment less environmentally-friendly and unhealthy to humans and other animals.

How Does a Water Conditioner Work?

How do water conditioners affect water? Remember, there are different kinds of water conditioners. They use various methods to create a catalytic reaction that changes the way minerals and biological contaminants behave in a liquid solution. The end goal is to keep this matter from building up on surfaces and causing serious issues like biofouling and scale buildup.

The exact way a water conditioner achieves this depends on what type of conditioner it is and what the system is capable of. The goal may be to reduce the formation of limescale, to slow the rate of scaling or to change the makeup of the scale so that it precipitates and doesn't adhere to surfaces at all.

No matter how a water conditioner manipulates the behavior of minerals, they all have some key things in common. Conditioners, as opposed to traditional water softeners, do not actually remove mineral ions, but they do prevent those ions from building up around the insides of pipes, on the heating element, nozzles, and plumbing fixtures. This solves one of the major problems hard water presents without adding salt. This is why you'll sometimes hear water conditioners referred to as "no-salt softeners”. This water treatment option is preferable for many people since water conditioners tend to be much lower maintenance and lower cost than traditional water softeners and do not add sodium to the water.

The HydroFLOW water conditioner keeps minerals, algae, and bacteria from becoming a problem in your water system by sending an electrical signal of 150 kilohertz (kHz) through your plumbing system. The signal causes the minerals to join together, forming clusters that eventually form stable crystals. These crystals do not cling to surfaces like individual minerals would.

The signal also affects biological matter. Most existing biofilm will break up and be carried by the flow of the liquid solution. Furthermore, the electrical signal charges the algae and bacteria, causing the cells to be surrounded by a layer of pure water. As water is forced into the cells via osmosis, the cell ruptures and perishes. 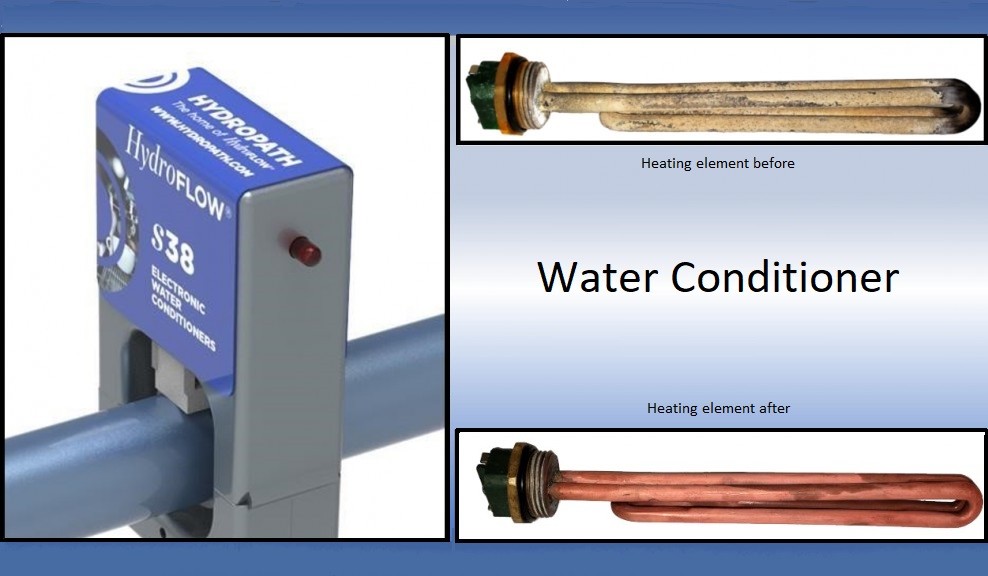 There may be many ways of treating water, but not all of these methods are equally effective or meet every industry's needs equally. Being informed is a critical first step. This way you can be sure you choose a solution that is right for your home or business. Don't take on the ongoing expense and maintenance of a water softener right away just because you need to treat your scale problems.

For some, a water softener may be the best solution, but it is by no means your only option. As we have seen, many other types of water conditioners can have a positive effect on hard water without actually removing the hardness minerals. Additionally, some of these conditioners are designed to prevent the accumulation of biofilm. In numerous cases, a water conditioner, rather than a water softener, is the perfect solution to address water treatment needs.

At HydroFLOW USA, we have developed an especially effective means of conditioning, water that doesn't require the use of any chemicals or salt. All it takes is an easy installation of a unit that is easily built around a pipe. This unit has a special transducer that is connected to a ring of ferrites. The unit delivers an electrical signal that travels through a plumbing system, regardless of the pipes' material. The water flowing through the pipes acts as a conductor to carry the signal.

As a result of this electrical current, ions — both positively and negatively charged — form crystals that are suspended in the water. Scale and biofilm won't build-up, and the signal also chips away at the already existing build-up. Hydropath Technology, which powers the HydroFLOW devices, is uniquely effective and efficient compared to other water conditioning options on the market today. With a HydroFLOW water conditioner, you're left with pipes, fixtures, and appliances that are clean rather than covered in accumulated minerals and biofilm. This allows them to work to their full potential and to last longer than they otherwise would.

We offer several product options to meet your specific needs. You can count on our products to thoroughly address the issues of scale, bacteria, and algae. Contact us today if you have any questions or want to learn more about how HydroFLOW water conditioners.